Atheism “On the Move” in Victoria

In a campaign aimed at raising the profile of Australia’s burgeoning atheist community, advertisements on Melbourne buses will soon carry the message:

Inspired by a massively successful promotion on London buses, advertising atheism on public transport has now “gone global”. David Nicholls, president of the Atheist Foundation of Australia, explains that, like the campaigns in the UK, Canada, the USA, Spain and Italy, the Australian promotion is financed by donations from local atheists.

“When we first floated the idea,” said Nicholls, “we were not sure how much support we would receive. To our pleasure, we were overwhelmed with offers and now have enough pledges to fund a significant advertising campaign in Victoria.”

The Victorian bus ads will roll out two weeks prior to the Global Atheist Convention to be held in Melbourne next March. But, while the Rise of Atheism convention is sure to create some controversy, Nicholls says the bus campaign is simply a public service announcement.

“We’re not selling anything,” says Nicholls. “We just want people to think about their beliefs, and consider that the fulfilment that many find in faith can also be gained by celebrating reason.” 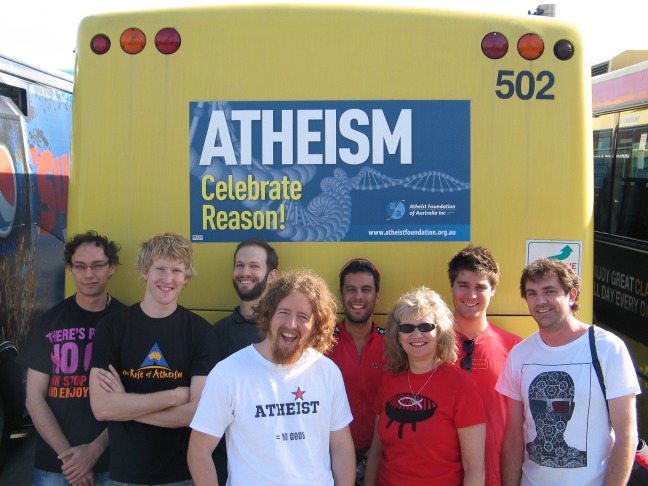 To YOU I'm an atheist; to God, I'm the loyal opposition.
I am against religion because it teaches us to be satisfied with not understanding the world.

“For those who believe in God, most of the big questions are answered. But for those of us who can't readily accept the God formula, the big answers don't remain stone-written. We adjust to new conditions and discoveries. We are pliable. Love need not be a command nor faith a dictum. I am my own god. We are here to unlearn the teachings of the church, state, and our educational system. We are here to drink beer. We are here to kill war. We are here to laugh at the odds and live our lives so well that Death will tremble to take us.”

The Bible and Church have been the greatest stumbling block in the way of women's emancipation.