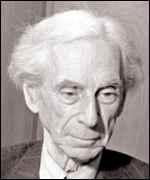 Bertrand (Arthur William) Russell (1872-1970) was one of the most influential philosophers of the 20th century. His ethical, philosophical and religious writings are a must read for every person seeking an understanding of atheism and the affect religion has and is still having on humanity.

He was a prolific writer on issues ranging through mathematics, philosophy, religion, education and politics. Bertrand Russell had an outstanding intellect which fuelled his devotion to humanitarianism.

His life was very eventful both professionally and personally. He was married 4 times, imprisoned twice for his pacifist principles (the last being when he was 88!), banned from teaching at 2 Universities, awarded the Nobel Prize for Literature and received an Order of Merit.

America, Germany, Russia, China and Australia were some of the places he visited during his life. While in China he became very ill and a report in a missionary newspaper in England stated that he had died. The obituary notice read ‘Missionaries may be pardoned for heaving a sigh of relief at the news of Mr Bertrand Russell’s death,’ to which he wrote in his Autobiography “I fear they must have heaved a sigh of a different sort when they found that I was not dead after all.” This comment is typical of Bertrand Russell’s humour and wit.

His Autobiography is truly high up amongst the most inspiring, funny, touching and fascinating books ever written. From the very beginning the reader is captured, with his touching poem to Edith his fourth wife, then on to the prologue What I have Lived for, an insightful look into the heart of this remarkable man.

Bertrand Russell remained politically and socially active throughout his long life. The campaigns he was involved with in his latter years included anti nuclear movements, the US involvement in Vietnam, the War Crimes Tribunal, assisting political prisoners and sponsoring an investigation into the Kennedy assassination.

“Many people would sooner die than think. In fact they do.”

“Conventional people are roused to fury by departure from convention, largely because they regard such departure as a criticism of themselves.”

“Until the deep conflicts of nations and classes which infect our world have been resolved, it is hardly to be expected that mankind will return to a rational habit of mind. The difficulty is that so long as unreason prevails, a solution of our troubles can only be reached by chance; for while reason, being impersonal, makes universal cooperation possible, unreason, since it represents private passions, makes strife inevitable. It is for this reason that rationality, in the sense of an appeal to a universal and impersonal standard of truth, is of supreme importance to the well-being of the human species.”

“To save the world requires faith and courage: faith in reason, and courage to proclaim what reason shows to be true.”