Sydney Atheists and the Atheist Foundation of Australia (AFA) have partnered in a billboard campaign on Sydney’s M4 motorway.

The billboard was unveiled this week at Homebush West, where it will be seen by over 100,000 drivers and their passengers each day for the next month. We thank Billboards Australia for their willingness in taking this project on at relatively short notice – because the same simple billboard was not taken on another advertiser, who disappointingly cited issues with the subject matter.

“The billboard is deliberately minimalist, with a single question and proposition for the reader” said Michael Boyd, AFA president.

“This should provide maximum ‘cut-through’ and also highlights the web addresses of both Sydney Atheists and the AFA, where people can go to find out more information about atheism and atheists.”

If you’re on the M4 anytime over the next month, drive safely – and look out for this: 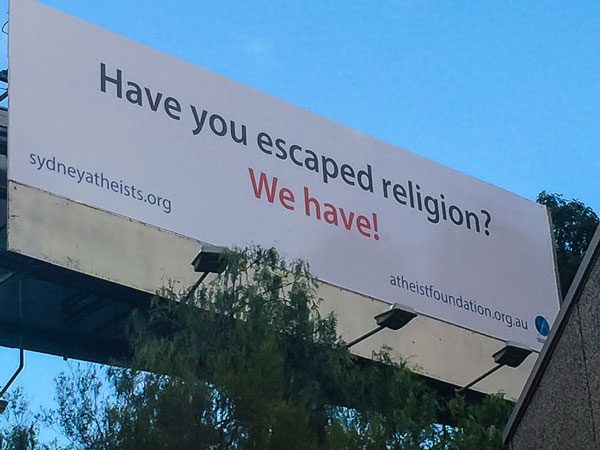 Religion is against women's rights and women's freedom. In all societies women are oppressed by all religions.

To YOU I'm an atheist; to God, I'm the loyal opposition.
To sum up: 1. The cosmos is a gigantic flywheel making 10,000 revolutions a minute. 2. Man is a sick fly taking a dizzy ride on it. 3. Religion is the theory that the wheel was designed and set spinning to give him a ride.