Abortion and the Alternatives

WARNING: GRAPHIC IMAGE IN THIS ARTICLE

Prior to 1869, the Catholic Church’s view was that abortion was permitted up until “quickening”.

However in 1869 Pope Pius IX declared that ensoulment occurred at conception and forbade all abortions.

With the second wave of feminism during the sixties we began to see the liberalisation of abortion laws. The first to declare war on legal abortion was the Catholic Church. It poured millions of dollars into the crusade of the anti-abortion/anti-women Right to Life organisation and later on it was joined by “born again” Christians, fundamentalists and other “pro-life” groups. The Catholic Church has made fighting legal abortion its number one priority and is determined to enshrine its religious notions into law.

Any woman unfortunate enough to fall into the hands of anti-abortionists will be shown graphic images of bloodied foetuses and films featuring foetuses in pain and recoiling in fear. Anti-abortionists argue that even early foetuses are capable of feeling pain and fear. While an ultrasound will show movement in an early foetus, that is reflex action, at that stage the foetus has no consciousness. It is not until around the end of second trimester when the majority of connections between nerve cells and the cortex are made – in other words that is when the brain is fully wired that the foetus acquires consciousness.

Anti-abortionists insist that life begins at fertilisation and that the fertilised egg has the right to legal protection in order to reach its full potential. They also oppose programs that would make abortion less frequent such as child-care, sex education, emergency contraception for rape victims and modern reliable methods of contraception.

In recent times anti-abortionists have adopted a new strategy in their crusade against abortion, the new strategy is a concept incompatible with “pro-life” dogma. Calling women and doctors murderers has not been very successful so they moved on to pretending concern for women’s health. There has been debate about the link of abortion with breast cancer. Studies show that there is no increased risk of breast cancer associated with first trimester abortion. Anti-abortionists have seized this opportunity to misinform, frighten and intimidate women into relinquishing control of their bodies. The fact is anti-abortionists, right to lifers and religious fanatics have never shown any concern for women’s health nor are they likely to do so in the future. On the contrary, they have always sought to punish women with forced pregnancy. 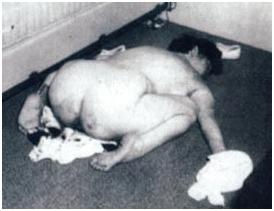 Before legal abortion.....do you want to go back to this?

In 1984, Angela Carder was struck with lung cancer while pregnant. She was hospitalised and her doctor recommended radiation and chemotherapy. Angela made it clear that she wanted her health to come first. But the doctors at the hospital had given Angela only days to live and would not prescribe chemotherapy because they feared it would endanger the foetus. The foetus was twenty-six weeks and if they could prolong Angela’s life for three more weeks – instead of trying to save it – the foetus would have a better chance. Instead of treating her cancer, they inserted a tube down her throat and pumped her with sedatives in order to delay her death. According to her mother, Angela thrashed and twisted on the bed trying to fend off the doctors but with the tube in her throat her battle was in vain.

The administration of the George Washington Hospital feared that they might be taken to court by anti-abortionists for failing to save the foetus. The administration proposed that a caesarean section be performed in order to save the foetus. The hospital’s doctors opposed the surgery since it would probably kill Angela. Angela was unconscious from the sedatives and rather that waiting a few hours for the drugs to wear off so they could ask her permission, the hospital administration called in a judge.

During the hearing the foetus’s lawyer Barbara Mishkin said: “Well I suppose it will hasten her death but Angela is probably going to die in a few hours anyway. Her rights should be put aside.”

The judge wanted to know how a caesarean would affect the health of the foetus but not how it would affect Angela. At the end he told the doctors to operate immediately.

The doctors delivered a girl; repeated efforts to inflate her lungs with a respirator were unsuccessful. Angela slipped into a coma and died two days later.

In Brazil, eleven-year-old X became pregnant after being raped. Her father concerned about the affects of pregnancy on his daughter, petitioned for an abortion, which was permitted by law because of the rape and the dangers of giving birth at such a young age. The day before the operation anti-abortionists marched on the town where X and her father lived reminding them that the Pope had called abortion an “abominable crime” and convincing him that his daughter’s life was not at risk.

Anti-abortionists deliberately ignore the plight of women in countries where abortion is illegal. They also choose to ignore the fact that most abortions are performed during the first trimester and that legal abortion is safer that giving birth. They highjacked feminist rhetoric in order to propagate the notion that women are exploited by abortion, that abortion causes depression, guilt and that it allows men to jettison their responsibilities.

Women, who have been indoctrinated by religion that abortion is a heinous crime, are bound to suffer from guilt after having an abortion. Whenever abortion is mentioned it is often accompanied by words such as “dilemma” and “controversial”, rather than treated like any other medical procedure. Religious belief still determines women’s decision on whether or not to have an abortion eg. women with several children or health problems “choose” to continue unwanted pregnancies they would otherwise terminate, had it not been for religious injunctions against abortion.

Anyone who has been thoroughly indoctrinated by religion is never truly free to make a decision about abortion or any other issue. In the Netherlands where religious morality has lost its stranglehold on society, women do not suffer from guilt or dilemma.

Some anti-abortion groups offer “counselling” to women facing unwanted pregnancy. Their literature is ambiguous and does not explicitly condemn abortion while claiming to offer alternatives to abortion. Their goal is to trick women to continue with the unwanted pregnancy. A woman with an unwanted pregnancy can seek counselling from a pro-women organisation such as the FPA Health (Family Planning Association) where her decision – whatever it may be – will be respected and supported

Every child has the right to quality health care, education and a decent standard of living. It should be loved, wanted and welcomed in every sense of the word.

The alternative of legal, safe abortion is the barbarity of forcing women to endure unwanted pregnancies. That will have a detrimental effect not only on the women but on society as a whole – we only have to look at the situation of women and children under the Ceausescu regime where childbearing had been declared compulsory. Up to 200,000 children were abandoned at overcrowded orphanages where they were kept in squalid conditions.

In some African countries women resort to drinking petrol, douching with bleach or inserting twigs in their uterus to free themselves from an unwanted pregnancy.

The alternative to safe legal abortion is clearly seen in the plight of women in Poland after the fall of communism. Since Poland’s restrictive abortion laws have been passed in 1993, morgues have begun to receive the bodies of women bearing witness to botched abortions. Dead newborns are found dumped in paddocks. In 1995 a woman with health complications, pregnant with her eighth child was refused a legally sanctioned abortion after a catholic priest had persuaded the doctors to withdraw their support from the woman.

The alternative to safe, legal and accessible abortion is a totalitarian, theocratic nightmare where a clump of dividing cells and an embryo or foetus with the consciousness of a potato would be accorded far greater legal protection than a woman.

In accordance with Roman Catholic dogma, anti-abortionists want nothing short of reducing women into expendable incubators.

Photo: Police photograph of a woman, bloodied towel in fist, crouched, naked and dead of a botched abortion. Her name was Gerri Santoro. In 1964, at the time of her lonely death, Gerri was the mother of two and abortion was a criminal act. The picture first appeared in MS Magazine in April 1973.

Recommended Viewing:
If These Walls Could Talk