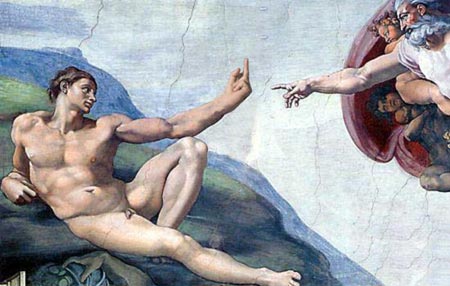 The three religions based on the Old Testament [Judaism, Christianity and Islam] are all homophobic. Why? There’s no logical reason. It seems to be based purely on a generalised dislike for the notion. I can understand their distaste because to me the idea of a man and a woman having sex and indulging in cunnilingus is quite nauseating. However, what consenting adults do in private is no business of mine and I wouldn’t consider damning them for it. The oft quoted sin of Sodom, frequently used as justification for homophobia, was, in fact, the rape of men by heterosexuals in order to humiliate strangers by treating them like women. Likewise in Judges 19-21. Deuteronomy 32: 17-18, refers to a heterosexual stud involved in fertility rites that infiltrated Jewish worship. As for 1 Corinthians 6:9 and 1 Timothy 1:10 , they refer to prostitution – not love. Leviticus 18:22 and 20:13 and Genesis 38 1-11 ban masturbation as well as same sex activity because in those days they thought the male sperm contained everything necessary to make a child – the woman was merely an incubator. Underpopulation was a major problem then, so it made sense to discourage the waste of precious male seed! Today, faced with annihilation through overpopulation, commonsense would suggest we encourage homosexuality!

Perhaps the major factor is the dent it makes in their concept of ‘male dignity’, or as we now say, Macho Image. The Middle East then as now was a rampantly patriarchal society where women are considered inferior. For a man to be equated with a woman was worse than death. Therefore, to ‘take the part of a woman’ reflected poorly on the machismo of the whole tribe. Indeed, it was so demeaning that Leviticus demanded the death penalty. Christian countries have obeyed this law until quite recently – happily burning gays to death. The death penalty still applies in Muslim countries. Today in Australia and the USA, Christian and Muslim youths continue the tradition by bashing, maiming and murdering gays with the [covert] blessing of their religious leaders. A couple of years ago in a public meeting in Sydney, Sheik Shadi, a Muslim cleric, supported by Keyser Trad of the Lebanese Muslim Association, called for an Islamic court to be set up which would give Muslims the power to stone gays and lesbians to death.

But why are homosexuals still hounded? The Old Testament damns hundreds of other things such as nudity [god would be shocked!! {This is what they believe!}]; sexual intercourse during the 7 days of the menstrual period [punishable by execution]; touching menstrual blood [renders you unclean]; intercourse [renders one unclean until sundown]; brides who are not virgins [to be stoned to death]; adultery [stoned to death]. All those ‘laws’ are ignored today. In contrast, Polygamy was not condemned – it was common practice then, but is condemned today! Paul [a misogynist] recommends not marrying at all! [Gore Vidal reckons he was Timothy’s lover, rewarding him by making him Bishop of Antioch.]

The Old Testament decrees that women are mere chattels to be bought and sold in a male dominated society. It endorses slavery, including female sex-slaves. It reckons the earth is flat, the centre of the universe, and the sun moves around it. Several writers encourage the ‘faithful’ to murder unbelievers. All these dreadful things have been conveniently ‘forgotten’. Why hasn’t homosexuality gone the way of these other outdated ‘laws’?

As well as the continuing machismo nonsense, it’s a question of saving ‘face’. Christians have spread the lie that they invented morality, ethical behaviour, kindness, good deeds etc. and sell themselves as ‘soldiers of Christ’ fighting ‘sin’. Well, modern society has decided that the old sins are simply human nature and refuse to be shamed. Only one group, gays, a substantial percentage of the population have been unable to throw off this burden of insane Old Testament damnation.

To demonstrate they are protecting the world from evil, Christians have clung to their last scapegoat – gays – and denounce, harass, humiliate and instigate hatred and violence against them to prove they are doing ‘god’s will’. It is sick and cruel. It is much worse than racism because a racially abused boy can at least seek the support of his parents. A gay boy has no one. His parents’ minds have been poisoned by religious dogma. He has to face hatred and damnation for the way he was born completely alone. There’s no one to turn to. That so many gay youths suicide is understandable. That so many survive to live relatively normal lives is amazing. Most heterosexuals don’t dare to help – Christian venom can be very frightening indeed.

Interestingly, Jesus is quoted in Luke 12:57 as saying ‘Why do you not judge for yourselves what is right?’ If this excellent advice were followed, everyone would be free to take into account new knowledge that shows that homosexuality is a normal variation of sexuality.

Today, with all the rational, scientific knowledge at our disposal regarding the nature of this planet and its inhabitants, the belief in gods, saints and angels is a form of insanity similar to agoraphobia, kleptomania, claustrophobia and other dementias that only affect part of the brain, leaving the sufferer able to act normally most of the time. I call this illness ‘Theomania” and it results from the teaching of irrational ideas from the earliest possible age.

For the first 6 years or so of life, human brains learn by ‘imprinting’. This is an almost instantaneous process of learning and, unlike later learning, is never forgotten. It may recede to the ‘back of the brain’ but can be ‘triggered’ by certain stimuli. Recent French studies have confirmed that the first face a baby sees on opening its eyes is imprinted on its memory. If that face belongs to the mother then that child will have few problems respecting and obeying its parents. If it isn’t the mother, then behavioural problems often develop. Languages, like everything else of importance to survival are imprinted at an early age. A child exposed to several languages spoken fluently during his formative years will be multilingual. After the age of about six, things are learned differently and are forgotten unless used frequently. The Jesuits are notorious for saying: “Give us a child till he is four and you can do what you like thereafter – he will always be ours,” Frightening, but true!

Children quickly learn to relate actions to consequences. Crying brings food. Falling hurts. Fire burns. Squashing a bug kills it. When the sun goes down it gets dark. If you do this, then that will happen… this is how we all learn to Reason, to use Logic and behave Rationally.

Fairy tales about good and bad, giants and gnomes, magic and enchantment teach children moral values. Later, reason tells them these stories are fantasy. However, in religious homes the myth of a god in the sky who made the universe, who sees all, hears all, and directs all is not dismissed as fantasy! Religious parents and priests insist that there are such things as angels in a place called heaven where, instead of dying, good people go to eat cream cakes forever. They swear the truth of hell where bad people go to burn forever. This nonsense interrupts the natural process of the development of logic. The child’s mental development is warped and the only way to cope is by closing that part of their brain to reason. That is what we call insanity. From then on they are unable to discuss, debate or countenance any facts that will prove their fantasy of gods, angels, heavens and hells is nothing but a figment of their imagination.

There’s no point, therefore, in arguing with a religious person. Their insanity is reinforced every time they go to church. Rational thinking about religion is impossible for them, and their response to questioning is frequently anger. Such people must be treated as irrational children – which is what they are when it comes to religion.

Gays with parents in that category are asking for trouble if they tell their parents/friends/ teachers that they are gay. Only pain will come of it because no rational argument can affect that infantile indoctrination – that certitude that god hates gays and they’ll be damned forever to the fires of hell. The rational argument that if god makes us all in his image, he is therefore male as well as female, heterosexual as well as homosexual, has no chance of denting the insanity of godspeak. Nor does the evil notion of a god deliberately making someone gay and then persecuting him, affect their sense of decency. All morality, all decency goes out the door when religion rears its ugly head.

Amazingly, it’s only when it comes to religion that these people malfunction. If you tell them you can fly, they won’t be stupid enough to believe you without a demonstration. If you tell them the cat that died last week has clawed its way out of its grave and is waiting for food, they won’t believe you unless they see it. Yet when a priest tells them a virgin gave birth and her son rose from the dead – they nod their heads wisely. Tell them that when you close your eyes you can ‘see’ what the neighbour’s doing, and they’ll tell you not to be silly. But tell them there’s a supernatural creature that’s everywhere at once, who knows what goes on in the hearts and minds of six billion people all the time, and they’ll believe you. When told that god hates gays they shudder in fear that their son might be gay. If told their son is just being naughty and only pretending to be gay, and he can be ‘cured’ – they’ll send their son to have his mind destroyed, despite dire warnings from reputable behavioural psychologists about the dangers of such mind-bending. Tragically, if their religious ‘adviser’ tells them something they never check the facts. So, what to do if you’re young and gay?

Some religious inanities and responses:

So, chin up and remember: –

* Homophobia is a form of insanity.

* Parents who do not respect their children do not deserve respect themselves.

* You are what you are and that’s all there is to it, so you might as well be proud of yourself.

Please feel free to contact us if you have questions or comments about anything in this article.

At a time of universal deceit - telling the truth is a revolutionary act.

Doubt is not a pleasant condition, but certainty is absurd.