Hypatia – A Victim of Bigotry 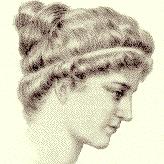 was the daughter of Theon, himself a mathematician and philosopher of note. Hypatia was a remarkable woman with great intelligence, physical stamina and beauty. Her father gave her a first rate education, not limiting it to just mathematical subjects, but also religion. Theon believed in learning about all religions allowing each person to make their own choices and not have one view thrust upon them. To be forced to hold to another’s view is in essence being robbed of your own life.

Hypatia herself says, “Fables should be taught as fables, myths as myths, and miracles as poetic fancies. To teach superstitions as truths is a most terrible thing. The child-mind accepts and believes them, and only through great pain and perhaps tragedy can he be in after-years relieved of them. In fact, men will fight for a superstition quite as quickly as for a living truth – often more so, since a superstition is so intangible you can not get at it to refute it, but truth is a point of view, and so is changeable.”

In about 400 AD Hypatia became head of the Plotinus school of Alexandria, where she taught mathematics and philosophy. She wrote three books on science and mathematics and numerous other papers. All of her writings have been lost and it is only through the letters of Synesius of Cyrene, one of her pupils that we know anything of her thoughts.

Hypatia was a pagan in a Christian society. This led to her having many enemies as well as admirers. That she was a woman, intelligent, beautiful and not afraid to speak her mind did not make her popular with the Church. So admired was she that Cyril the Bishop of Alexandria was becoming increasingly concerned at her influence on paganism upon the people of Alexandria. When he passed by her house he could see the many admirers waiting and his hatred of her popularity grew.

The Prefect of Alexandria was Orestes and a great admirer of Hypatia. He went to nearly all of her lectures. A power struggle between church and state not surprisingly, saw Cyril and Orestes become bitter rivals. Riots between the religions were increasing and one day Hypatia was brutally murdered by a fanatical group of monks. She was hacked to death with shells and her body dragged through the streets. It is believed to have been at the instigation of Cyril.

Ironically Cyril ended up being given a Sainthood by the Church!

Alexandria was once the leading centre of learning. After Hypatia’s murder many scholars left Alexandria leading to the decline of this once great city.

“Life is an unfoldment, and the further we travel the more truth we can comprehend. To understand the things that are at our door is the best preparation for understanding those that lie beyond.”

“All formal dogmatic religions are fallacious and must never be accepted by self-respecting persons as final.”

“Reserve your right to think, for even to think wrongly is better than not to think at all.”

Encyclopaedia Britannica
A History of Western Philosophy – Bertrand Russell
The Hypatia Institute
The Primary Sources for the Life and Work of Hypatia of Alexandria – Michael A. B. Deakin