CHRISTOPHER HITCHENS, a very successful author living in Washington, has provided many fascinating revelations about the work of an Albanian nun, Agnes Bojaxhiu, who is better known as Mother Teresa of Calcutta. He refers to her as being on the fast track to sainthood whilst dominating a missionary multinational. He questions the fitness of a very old virgin to adjudicate on the matters of sex and reproduction, and looks with suspicion at her genial relations with dictators, corrupt tycoons, and convicted frauds.

His book provides an extremely interesting exposure of the Teresa cult. As the emissary of a very determined and very politicised papacy she is a very successful campaigner on behalf of her Missionary of Charity organisation with its 400 nuns and 40,000 lay workers, earning the unending gratitude and support of the Vatican.

Some people worship Mother Teresa and, most unfortunately, many will support her fanatical campaign against contraception and abortion. But nobody can ignore the facts that India’s population of nearly one billion is disastrous; its unemployment is 50%, as is its illiteracy. When Mother Teresa was asked if she would agree that there are too many children in India she replied: “I do not agree because God always provides. He provides for the flowers and the birds, for everything in the world he has created. And these little children are his life. There never can be enough.” The author remarks, “if it were true that God always provides, then obviously there would be no need for the Missionaries of Charity in the first place”. So what we see is an exercise in propaganda for the Vatican’s population policy. Mother Teresa’s support seems grotesque; she must know the suffering and misery caused by this papal policy. 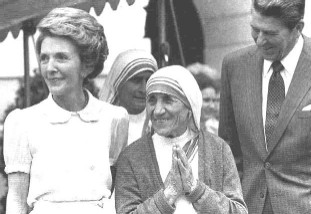 Mother Teresa is welcomed at the White House by Ronald and Nancy Reagan, shortly after testifying on Capitol Hill to support the move to end abortion in the United States.

Mother Teresa has been favoured with huge sums of money during the past 30 years, but patients’ illnesses have been wrongly diagnosed by unqualified sisters and volunteers unable to distinguish between the curable and incurable . Mother Teresa prefers providence to planning, and the very strictest economy is always enforced – much to the detriment of the patient’s interests. It is interesting to note that, despite the enormous sums involved ($50 million remains in a cheque account in the Bronx), needles are used over and over again, and are rinsed under the cold water tap. The nuns’ answer to “why are you not boiling water and sterilizing your needles?” was simple: “There’s no point. There’s no time.” Perhaps the patients take too long to die, and hastening death saves money. Cynical as that may be, Mother Teresa’s global income is more than enough to equip several first class clinics like some of the finest in the West that she herself has checked into. To a person in the last agonies of cancer, and suffering unbearable pain, she said with a smile: “You are suffering like Christ on the cross. So Jesus must be kissing you.” A sign on the wall of the morgue of Mother Teresa’s Home for the Dying reads “I am going to Heaven today”.

Mary Loudon, a volunteer in Calcutta, was shocked by what she saw there. “It looked a bit like the photos of Belsen”, she said. “All patients had shaved heads, there were old stretcher beds, no chairs, and not much medical care or painkillers”. In another home, despite the existence of huge sums of money: “The sisters are rarely allowed to spend money on the poor they are trying to help. Instead they are forced to plead poverty, thus manipulating generous, credulous people into giving more goods, services and cash.” So great wealth has no good effect on the lives of patients and volunteers. In a damp house heating remains off throughout winter and several sisters consequently got TB. This was stated by a woman who left the Missionaries of Charity for the same reason she joined it, “a love of her fellow humans”.

Mother Teresa has a San Francisco hostel named The Gift of Love; it is for homeless men with HIV. They are not allowed to watch TV or smoke or drink or invite friends, not even when they are dying, and so, of course, they are exceptionally depressed. One man said how afraid he was of dying without morphine. It is hard to find anyone with a good word for The Gift of Love. 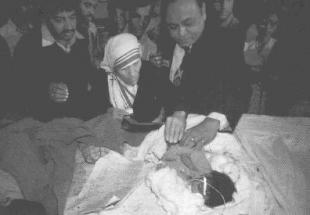 Rushing to Bhopal in the wake of the Union Carbide chemical spill, Mother Teresa was asked for her advice and counsel. 'Forgive', she said. "Forgive, forgive.'

Charles Keating was a notorious American swindler now serving a 10-year sentence for his part in the Savings and Loans scandal. He was generous with the money he stole from small investors. He gave Mother Teresa 1Â½ million dollars and the use of his private jet; in return she allowed him to make use of her prestige on several important occasions and gave him a personal crucifix. During the course of his trial she wrote to the court seeking clemency for the conservative Catholic fundamentalist and notorious thief. It was a suspiciously naive letter which did nothing to influence the judge . It prompted the Deputy District Attorney in Los Angeles County to write with some facts about Keating’s crimes, about which Mother Teresa knew nothing.

After referring to Keating’s conviction for defrauding 17 individuals of $900,000 he concluded with this statement “You urge Judge Ito to look into his heart – as he sentences Charles Keating – and do what Jesus would do. I submit the same challenge to you. Ask yourself what Jesus would do if he were given the fruits of a crime; what Jesus would do if he were in possession of money which had been stolen; what Jesus would do if he were being exploited by a thief to ease his conscience. I submit that Jesus would promptly and unhesitatingly return the stolen property to its rightful owners. You should do the same. You have been given money by Mr Keating that he has been convicted of stealing by fraud. Do not permit him the “indulgence” he desires. Do not keep the money. Return it to those who worked for it and earned it! If you contact me I will put you in direct contact with the rightful owners of the property now in your possession. Sincerely, Paul W. Turley.” Three years later Turley had received no reply to his letter. Nor can anybody account for the missing money; saints, it seems, are immune to audit. This is not the only example of Mother Teresa’s surreptitious attitude to money, nor of her hypocritical protestations about the beauty of poverty. 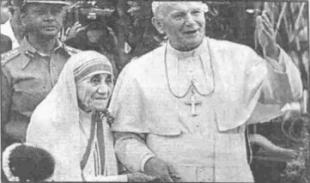 This immensely well-researched book is a great credit to its author. The prospects of Mother Teresa bluffing more millions has, I hope, been sharply reduced. There are, of course, Catholics who have worked honestly and selflessly and sacrificed much without an ulterior motive, but she is not one of them. It would be reasonable to be suspicious of anyone who is popular with the like of American crook, Keating, exposed villain, Robert Maxwell, Margaret Thatcher and Ronald Reagan. And when the response to those responsible for an avoidable disaster is “forgive” we know that Mother Teresa remains a constant barrier to progress and justice. Without doubt she is an extremely successful and shrewd campaigner, but readers seeking for signs of compassion may find – as I did – that it is secondary to the promotion of religious dogma. If it is thought that I have revealed too much, please read the book. There is a lot more damning evidence to provide us with a reminder that “all is not gold that glitters”.

To assert that the earth revolves around the sun is as erroneous as to claim that Jesus was not born of a virgin.

I am an atheist, out and out. It took me a long time to say it. I've been an atheist for years and years, but somehow I felt it was intellectually unrespectable to say that one is an atheist, because it assumed knowledge that one didn't have. Somehow it was better to say one was a humanist or agnostic. I don't have the evidence to prove that God doesn't exist, but I so strongly suspect that he doesn't that I don't want to waste my time.

Religion is a by-product of fear. For much of human history, it may have been a necessary evil, but why was it more evil than necessary? Isn't killing people in the name of God a pretty good definition of insanity?