The Wrath of Allah – Book Review 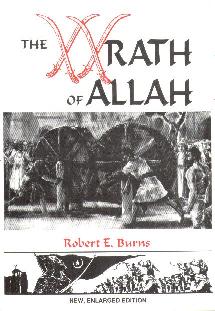 “The aim of this book is not to belabour Islam gratuitously. There are good and bad in all religious and ethnic groups. Some of the actions of their opponents have been far from lily-white but we are not primarily dealing with the behavior of the Israelis, Crusaders and Inquisitors here.

I would not want this book to be used as ammunition by neo-Nazis or other bigots against Muslim immigrants. However, I do believe that Islam presents a threat to open, pluralist societies“

THE RATIONALIST NEWS July 1996
(Journal of The Rationalist Association of N.S.W.)

This is in the first place a collection of materials, drawn from authoritative Muslim sources, displaying the essential nature of Islamic belief and practice. The first chapter sketches the main teachings of the Qur’an, a work which is supposed to consist entirely in ipse dixits of Allah (the Arabic word for “God”). The second is an outline biography of Muhammad to whom those divine utterances were, it is alleged, originally communicated, and who was by them proclaimed to be God’s final Prophet. The third consists in passages from the Hadith, the tradition of deeds and words attributed to the Prophet which, together of course with The Qur’an, provide that basis of Islamic laws.

The fourth and by far the longest chapter, mischievously entitled “Helpers of Allah”, runs through a long list of abominable deeds done in the name of Islam’s god. This list begins with the story of the first Caliphs, the pretended and accepted successors of the Prophet as masters of the Muslim people. But it is mainly concerned with massacres, murders and persecutions in many countries of the world during the present century.

Chapter five deals with “Women and Islam”, and provides sickening surgical details of cruel practices tolerated, if not promoted, by that religion. Chapter six is entitled “The Psyche of Islam” but actually deals with the malign and monstrous nature of Allah, supposedly self-presented in The Qur’an. Chapter seven “A Golden Age?” treats the question whether there ever was a golden age of Islamic science and philosophy. The answer seems to be that, although there was a period during which Muslim scholars were the crucial channel through which Greek learning was transmitted to the Christian West, the achievement of these Muslim scholars themselves for several subsequent centuries was lost to the Islamic world through domination by hard line obscurantist Imams.

The final chapter “The Two Faces of Islam” contrasts the actions and utterances of those described by the media as fundamentalists and those peaceable and easy-going professing Muslims with whom many of us are personally acquainted, and urges as the moral of the whole book that the former constitute the true face of Islam. This contention is both true and extremely important. For all Muslims are as such fundamentalist since, whereas only a tiny minority of all the sentences in The Bible are those attributed to God in any of those three persons, every sentence in the Qur’an is alleged to be uttered by Allah. And all too many of these utterances are in fact incitements to behave in the manner of those miscalled fundamentalists. They would more appropriately be described as Muslim revivalists.

Since there are well over a billion professing Muslims in the world today, including formidably growing minorities in many Western democracies, and since so many of the still larger number of professing Christians are so much less committed to their nominal religious allegiance, this is a book which ought to be widely available and widely read. For all of us need to recognise Islam is not like any of the other great religions, but is one which was from its beginning committed to, and spread by, violence rather than peaceful persuasion, and which remains difficult, if not impossible, to accommodate within a secular democratic state.

I do not feel obliged to believe that the same God who has endowed us with sense, reason, and intellect has intended us to forgo their use.

My mother was Southern Irish, and I was brought up as a devout Catholic. In fact, at one point I thought I'd become a priest, but I'd have made an appalling priest anyway... At 16, I asked all these monks some serious questions and they didn't come up with the answers, and I just decided I didn't believe in God.

For me, it is far better to grasp the Universe as it really is than to persist in delusion, however satisfying and reassuring.

If God has spoken, why is the world not convinced.

Isn't it enough to see that a garden is beautiful without having to believe that there are fairies at the bottom of it too?