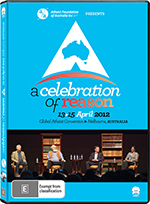 The 2012 Global Atheist Convention, A Celebration of Reason, brought together a line-up of atheism’s brightest stars. Inspired by the success of the Atheist Foundation of Australia’s first convention in 2010, and attracting twice the numbers, the 2012 convention was a joyous and momentous event, and a feast of what some of the world’s finest thinkers have to offer. A triumph of humanism, reason and secular values, the 2012 Global Atheist Convention will be remembered as a landmark moment in the history of atheism in Australia and beyond.

If you were unlucky enough to miss it, or just want to revisit the moment, this DVD contains presentations from the 2012 Global Atheist Convention.

A Tribute to Christopher Hitchens

…and many more speakers

Over 800 minutes from the 2012 Global Atheist Convention.

THIS IS A ‘REGION 0’ DVD RELEASE AND WILL OPERATE ON INTERNATIONAL DVD PLAYERS.

The DVD will be released on the 20th September, and can be pre-ordered from Siren Visual for $34.95.

ATHEISM = Liberation through Reason and Knowledge.

If you want to get together in any exclusive situation and have people love you, fine - but to hang all this desperate sociology on the idea of The Cloud-Guy who has The Big Book, who knows if you've been bad or good - and CARES about any of it - to hang it all on that, folks, is the chimpanzee part of the brain working.