What do you hope for?

For many Australians, it’s an opportunity to expand horizons, be challenged and enjoy the experience!

From 9 – 11 February 2018 that opportunity will come to Melbourne with the third Global Atheist Convention.

Headlining the event at the Melbourne Convention Centre will be two of the world’s best-known atheists: Salman Rushdie, author of The Satanic Verses, and Ayaan Hirsi Ali, author of Heretic and Infidel. The jam-packed three-day program will also feature comedy acts, panel debates, book signings, a gala dinner and more world-renowned speakers.

Hosted by the Atheist Foundation of Australia (AFA) the Convention’s theme is Reason to Hope.

“There is reason to hope,” AFA President Kylie Sturgess says, “in a gathering such as this that welcomes all audiences. At past conventions we’ve had people from a broad range of backgrounds and seen committed atheists engaging with religious-but-curious types on issues that matter to all of us.

Is a humanist, skeptical, secular approach our best hope for the future? Increasing numbers of Australians think so and this event is about finding a place for the godless in contemporary Australia and the world.”

The last two Global Atheist Conventions (The Rise of Atheism in 2010 and A Celebration of Reason in 2012) attracted thousands of people from Melbourne, Australia and around the world.

“They came from all over,” Ms Sturgess says, “to listen to world-class speakers on topics ranging from historical humanism and scientific findings to activism and outreach. But best of all, it was fun. The comedians were brilliant and the Saturday night dinner a definite highlight. People left feeling uplifted and energised, with a real sense of optimism and hope for the world.”

Tickets will be on sale soon for the 2018 Convention via atheistconvention.org.au. 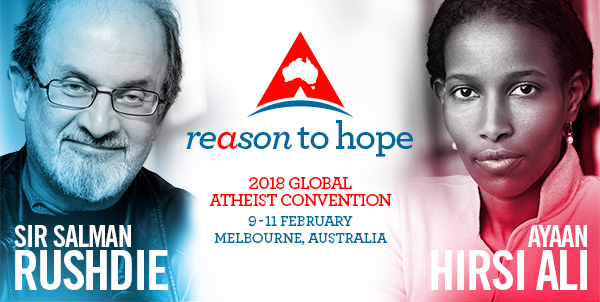