Non-believers by far Australia's largest single 'religious' group: Now give us the recognition we deserve

The godless in Australia say enough is enough.

After today’s release of Census data showing that non-believers make up 30.1% of the population – easily overtaking the previously-highest response “Catholic” for the first time in Census history – the Atheist Foundation of Australia says it is time to stop pandering to religious minorities and take religion out of politics.

“The godless in Australia is a huge force to be reckoned with. Whether you’re an atheist, agnostic, humanist, rationalist, a free-thinker or even someone who considers themselves spiritual but not religious, you’re part of a powerful voting block that deserves to be heard.

Our political, business and cultural leaders must listen to the non-religious when we demand public policy that’s based on evidence, not religious beliefs. This includes policy on abortion, marriage equality, voluntary euthanasia, religious education in state schools and anything else where religious beliefs hold undue influence.”

The AFA says while certain religions – represented by the Australian Christian Lobby, for example – enjoy close connections with certain politicians, atheist representatives have tried, and failed, on multiple occasions to meet with policy-makers.

“It seems to us that certain religious groups get automatic consideration in the public policy sphere. They enjoy a privileged position that isn’t afforded to other large groups, such as the non-religious. That has to stop. Politicians, business leaders and influencers take heed: this is an important milestone in Australia’s history. Those who marked down ‘No religion” deserve much more recognition. We will be making our opinions known, and there’s power in numbers.”

The Atheist Foundation of Australia will kick-start this much-needed recognition with Reason to Hope, the largest convention of its kind in the southern hemisphere, to be staged in Melbourne in February next year. Headlining the global atheist convention will be Sir Salman Rushdie, author of The Satanic Verses, with British science comedian Robin Ince, American author Greta Christina and Australians Jane Caro, Tracey Spicer, Rod Quantock, Clementine Ford and Jason Ball also scheduled to appear. 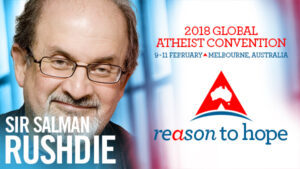 Tickets are now on sale for the 2018 Global Atheist Convention, via atheistconvention.org.au

In the lead up to the 2016 Census, the AFA led a public awareness campaign about changes to the way the religion question was asked. For more background, see below.

The AFA’s national public awareness campaign to ‘Mark no religion’ ran for six weeks prior to Census night.

It included signage at more than 500 pharmacies and supermarket carparks, on various websites, on one billboard in Melbourne, and via social media. 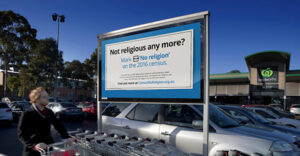 An example of the AFA's advertising campaign signage

It invited Australians to mark ‘No religion’ on their Census form, if that best described their religious state.

The 2016 Census was the first in Australia’s history where the ‘No religion’ option sat at the top of ten possible responses, rather than at the bottom.

The Australian Bureau of Statistics made this change to make the religion question consistent with the way other questions were asked on the form.

Globally, the numbers of ‘non-religious’ is increasing. Religiously-unaffiliated people account for 16% of the world’s population. They make up the largest “religious group” in seven countries and territories, and they are the second-largest group in roughly half (48%) of the world’s nations *.

* What is each country’s second-largest religious group