The Atheist Foundation of Australia (AFA) is excited to announced that Tracey Spicer – journalist and author of The Good Girl Stripped Bare – and prominent feminist writer Clementine Ford will speak at the 2018 Global Atheist Convention, Reason to Hope.

“We are thrilled that Tracey and Clementine will speak at Reason to Hope, adding their perspectives to a world-class line-up that includes Sir Salman Rushdie, Robin Ince and Jane Caro. The Convention is going to cover a fascinating blend of social issues, science and comedy.” said Kylie Sturgess, President of the Atheist Foundation of Australia.

Tracey Spicer and Clementine Ford will join a range of world-class speakers and entertainers at Reason to Hope, including

The last two Global Atheist Conventions (The Rise of Atheism in 2010 and A Celebration of Reason in 2012) attracted thousands of people from Melbourne, Australia and around the world to an eclectic mix of speakers, comedy acts, panel debates, book signings and a gala dinner.

Reason to Hope, to be held in Melbourne from 9 – 11 February 2018, will inform, entertain and challenge attendees’ thoughts about atheism and the role of the godless in the current political and social climate.

Tickets are now on sale for the 2018 Global Atheist Convention, via the Convention website at atheistconvention.org.au. 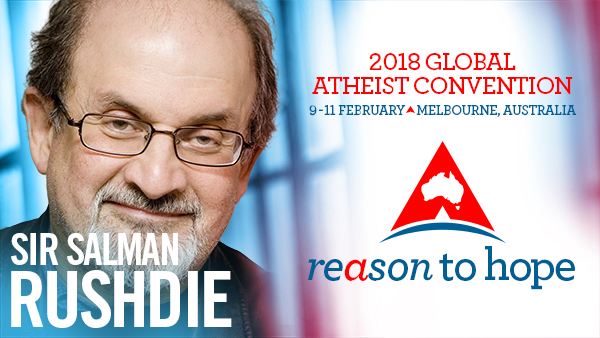